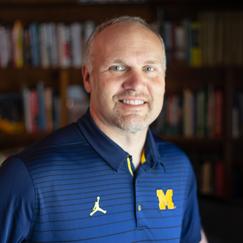 Erick Anderson has been teaching Adapted Physical Education for the Shaker Heights City School District since 2006. He is a former professional football player who was drafted in 1992 and played for the Kansas City Chiefs (92-94) as well as the Washington Redskins (94-95). Anderson was a Captain and four-year starter at the University of Michigan, as well as the only player in Michigan football history to lead the team in tackles for four consecutive years.

Other honors include: United Press International First-Team All-American in 1991, 1991 Co-Defensive Player of the Year in the Big Ten Conference, the Butkus Award and the Jack Lambert Trophy as the best collegiate linebacker in the country. He graduated from the University of Michigan where he earned his Bachelor Degree in General Studies. Anderson went on to earn his multi-age physical education license from Cleveland State University.

Erick has worked in the field of special education in the Shaker Heights Schools since 2004 and has developed a passion for adapted physical education. Anderson has also coached Varsity Football, JV and Varsity Girls Lacrosse and JV Field Hockey for Shaker Heights High School. In addition, he was a co-founder of a private social skills therapy program serving clients in Northeast Ohio from 2007-2016. Erick and his wife Hilary have two daughters and currently reside in Beachwood, Ohio. Both daughters went on to play DI collegiate athletics; Kendal played field hockey at Michigan State University (2013-17) and Kasidy currently plays Ice Hockey for Northeastern University (2015-19) and plans to play one year of field hockey for the Huskies when her ice hockey eligibility is up before graduating in the fall of 2020. Hilary played field hockey for the Wolverines and is the former Head Coach and current assistant coach for Shaker Heights field hockey.